I'm planning on starting a Patreon!
More information can be found at the bottom!

Yo yo, I've been hard at work cleaning up Chitinous Carnival's code base for future content. As important as this process is, it's long and boring for you. However, I've managed to make some new scenes! These scenes add two new paths when you try removing the parasite. Additionally, it introduces a new mini-game for pulling it out. They can be found when you choose to pull your cock out of the glory hole: 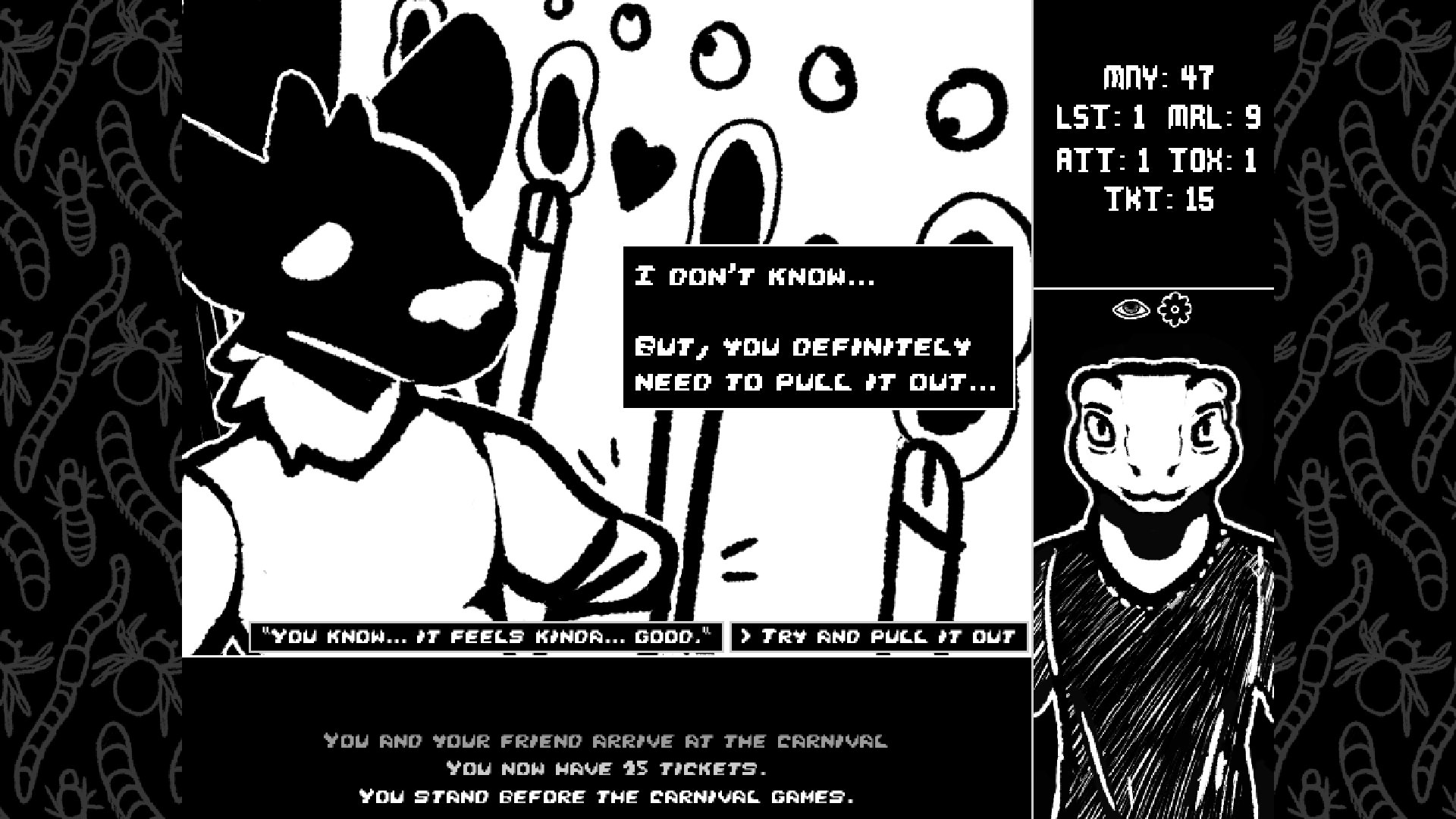 Also, this update introduces some new settings to the game. These settings are subject to change as the game expands, but here is the current set:

Next, the stats are undergoing a rework. The original stats were not well planned for the mechanics I wanted for CC.  These stats will come into play as I work on expanding CC's content. This update has introduced the following:

Also, this update includes the start of the prize, trap, and inventory system. It's very much a work in progress. However, I have content planned for v0.3.0 that will utilize it. So stay tuned for that to be released in the future.

In addition to all that, I've made an experimental mobile build! It is a bit of a test to get feedback on how it handles a touch screen interface. Hopefully it all works well though. v0.3.0 will likely come with changes to re-balance the game when running on mobile.

And finally, this update will introduce a special Support Version of Chitinous Carnival. Anyone that has previously bought the game will receive it. Additionally, people that pay 5$ will have access to the Support Version.  Furthermore, I'm planning on starting a Patreon to fund the development of my comics and games. I'm a recent computer science grad stuck in the Job Search Abyss, so any financial support means a lot.

Update:
The Patreon is live!
https://www.patreon.com/qwaxilixard

(I am also setting up a SubscribeStar in case Patreon does not approve my page. They have not been kind to fetish content recently.)

An adults only carnival crawling with creative attractions

Hello! Just a dude who took notice on e621, and I'm quite interested on this project. And of course, some questions here! (may include bad engrish)

I'm curious what stuff would the protagonist and his friend go out doing. What major choices and flags would they handle?

2. How would stats reflect choice and gameplay?

Lust and Moral would definitely shift the mood & subsequent choices, but Intoxication looks like a boost stat that doesn't do anything on its own. / How would infested mind and body parts show and respond on portrait, mini-games or traps? / Would the environment change the further the game rolled out?

3. What is friend's role in this game?

Noticed I could also inspect him in a same manner like the protagonist. How would he impact the game?

Thanks for reading this... long and vague stuff here. Maybe I'm fueling myself with unnecessary hype & detail, but that was a great presentation. Wish you good luck on the game!

Sorry for the delayed response. I've been quite busy. I try to restrain how much of my desires for Chitinous Carnival I share. Content doesn't work out, plans change, things take longer than expected to develop, etc. However, I will try my best to answer these questions:

The 'goal' of Chitinous Carnival will be to either "escape" the carnival or join it. Escaping can be done by using up all your tickets and leaving. Joining the carnival can be done simply by letting it pull you in.

1b. What major choices and flags would they handle?

2a. How would stats reflect choice and gameplay?

As you note, the big two will be Moral and Lust. Moral will be the stat that causes scenes and dialogue options to change the most. Lust will present additional options or, in some cases, force the player down a path. Intoxication servers as a way to tip the scales. Attention relates to NPC frequency.

2b. How would infested mind and body parts show...?

2c. Would the environment change the further the game rolled out?

3. What is the friend's role in this game? How would he impact the game?

Mechanically, he servers as a way for the play to deflect the event. I'm still refining the details, but he'll play into changing the Morality stat.

Hi! I don't seem to be able to download the supporter builds even though I bought the game before this release.

My apologies, I was hoping itch.io would automatically let early itch buyers access the builds. I will be sending out emails containing keys to early purchasers. I do have one question: Did you buy it for 5$ or less than?

I'm asking because I don't know if everyone needs an email, or just people that paid under 5$.

What is the difference on normal and supporter version?

Supporter Version will come with my debug console. This lets you jump to various scenes and set different variables in the game state (stats, items you have, events you scene, etc.). Patreons will get early access to the updates. No content will be permanently pay walled, I don't like the idea of doing that.

Gotta make sure the bugs stay in the cocks, and away from the code 😉