Dissatisfied with yourself and yearning for a new body, you turn to dark magic. Magic with the power to open doors between worlds. Magic that can summon a forgotten god. A god that might offer you the change you've so long yearned for.

However, you must indulge it in a game of cards.

For 3.99 on Itch.io or 3$ on Patreon, you can get access to the gallery as well as the ending images to the game.

Additionally, if you liked the game, consider living a quick 5 star review.

Press Tab to hide the dialogue box.
Use mouse to click on cards.
Enter to advance dialogue.
The card game is a loose implementation of the single-player tabletop game, Donsol, by John Eternal.

This was weird but really well done and surprisingly wholesome! Usually insect TF's don't do it for me but this one did. Great work.

Because I'm not a native English speaker, I don't know whether the boy likes his new body, but I understand all the part of Izorath exploring the new entrance of the boy。。。

I am unable to unzip on android

hey would be cool if there was cheat code

The game is great and fun and the end scene is delicious. That being said I NEED those cards in physical form. the art is fantastic on them!

I beat it after only an hour~ Bad RNG sucks.

Edit: Actually it wasn't too bad, I rebeat it on the second try.

This game is nice, i should have left comment when it came out. Hey quan do you feel sad about the way you look and that is your inspiration for making this game?

So this is what you've been working on instead of chitinous carnival, neat.

On that note, do you have any development for CC?

Hell yeah I get to become a cool bug

Shame the rest of your gallery isn't for me. Sympathetic bugs are quite underrepresented, but parasites and sounding aren't my thing.

Really wanted to play, but the game stopped responding to input. Reloaded the page and now even clicking "Play" does nothing. :(

Reply
Luvv_xox the kitti124 days ago

Very well animated, has a very cool card game and is meant for all three of us that like this kind of stuff. Great job, dev.

also it is very holsom keanu/chungus, I would like to keep them company c:

you should definitely make these real cards and sell them

oh man. heres a creative idea, a re-skinned version of the game with nanobot-slime like machine that allows you to become one with it, literally and physically as it envelops around you with the chastity effect becoming it molding and integrating with your body in an awesome yet devious manner!!!

just an idea anyways, what do you think of this crazy idea to create a re-skinned version of the game with this idea instead... as a funky side project of course.

This game is really good, with the gameplay, art, story, and the ending added all to a great game. 10/10! Would recommend to anyone else. And possibly in the future I hope for other elder gods like cuthulu.

This was really bloody good! card designs were great. I had a little bit of a struggle getting the win in the end but it really added to the ending! the relief of clearing the deck and then the really heart-warming and sweet ending! now I wish I too could summon an elder god. ty!

I have been using Itch for ever, and this is the one thing that made me create an account just to say how much this sucks! This is the stupidest garbage i have ever seen! The game is completely idiotic and i can't even tell what cards i am looking at sometimes. Just give us a freaking win button and let us see the porn! And THIS garbage is what you have been doing instead of Chitinous Carnival? Just WHY??? You could just have put this as a fun little game of like... 3 rounds into CC and have THAT character transform, but instead you chose to take a boring game, that only someone who has access to nothing but a deck of cards would play, and you lock your art behind it. That's freaking garbage!

I kept eating it 'till I learned cards you leave behind stay in the pool, which lead to a lot of chain jokers at the end, and very few healing/armor.

Deal with the powerful cards, and preserve powerful healing cards for the end of the deck.

Game's actually pretty easy once you understand the rules. You have to skip jokers till you have a large amount of armor and defeat anything else, cause it's the only big threats in the game. Everything else is about collecting that much armor that you can destroy all enemies on board

I think someone should be on e621 or something and not looking for a challenging game to entertain them :3 I personally loved it! It's a very strategic game with great art and a simple base behind it, kinda like the card game against Sebastian in Angels With Scaly Wings. I thoroughly enjoyed it the whole time! Plus insects are hawt >w<

Can someone explain the chasity mechanic?

The gist of the system is as followed:
When you pick up chastity, it will protect your X amount of damage. When you attack a monster, that chastity will become damaged. The next monster you attack must be weaker than the previous.

If you had attacked the 8 first, your shield would break trying to attack the 11 since 8 > 11.

From what I could tell the "chastity" is basically your armor. Not to sure how it is calculated but if it's above 0 then good enough lol just keep lust low.

The armor mechanic is a bit weirdly explained at the beginning (all upfront, too, and not re-explained unless you relaunch the game), so I fumbled a lot during my first couple attempts without even a good udea of why I died or how close to death I was. "Shield break: 3" isn't the most intuitive thing unless you actually understood how armor works.

Would also have been nice to have the damage and healing values in the card tooltips, since it's easy to forget when dealing with the face cards.

Once you get past that learning curve and realise you can leave the healing cards you don't need (so they show up later) by escaping a half-cleared room, it's actually rather easy, but a pretty neat game nonetheless!

I got 4 hours of sleep last night, worked 12 hours. Didn't sleep after work. I saw 'card game'5 hours before sleep 'ah that'll be a way to relax before bed.' I was wrong. 1 hour left before I wake up for work and do another 12 hours. Worth it. Thank you. I would do it again.

it's impossible !!! I'm trying anyway I can't do it!! someone help me please

Gather diamonds cards - they give you armor

That's all. Really, you have to just defeat everything

strategy, leave the big helpful stuff for last, and get rid of the big stuff that removes your health asap.

this is to help those who are struggling

It feels next to impossible for me. I know it is posssible, but it's just way too hard. Why did it have to just be 21 health?

how do i beat this easily T^T

I played but I don't really understand how to play... I only lose what makes me start all over again, who can help me understand the game?

Damn this was so hot. I hope theres more updates or additions!

So... I can to estimation this game, despite blocking twitter in Russia. Game is pretty))~

Only question what i have. This changes in furry OC is permanently? That so strange question. Just my attitude to this is twofold.

I want to see the continue

Game's really quick to complete and simple to understand. The story is quite common for me, imagining yourself transform into someone else because you feel not in the right place or maybe not in the body you want. It's a strange situation that's hard to explain, so I'll try to rate the game. In my opinion it's 8/10.

-1 for it's simplicity, but it's made for jam so you may not count this one

Overall, the game's good and I want to play something like that or the sequel (if it'll ever come out).

Just played through and beat the game twice. Loved it. I did find a bug (heh) though:
if (after losing more than once) you click a card while the new game is being dealt, the cards are dealt face down and are not clickable. fleeing the room with face down cards causes no cards to be spawned.
I would be happy to make a video showing this if needed. Keep making great games!

Yeah, I watched my BF find that bug. It's a very quick fix. However, I don't know if it's critical enough to fix right away since only a handful of people have find it so far. But, it will get fixed once voting ends.

can you make a video of beating the game? I can't seem to win.

This is so good. Very nice. I would love to see more ideas like this. And also it would be cool to see real versions of the cards from this game either through them actually being made (I kinda doubt that would happen) or a release of the art of the cards so people can make it themselves, maybe through patreon or something.

I'm not sure what to think of the ending. It made me sad, where the protagonist feels so out of place that they literally leave the world. Why can't Izorath stay? Why do we have to be the ones to leave?...and why do I relate to this?

An amazingly written game. Thank you for making this.

This game's atmosphere is very charming. The music and the dialogue are all pleasant, and the visuals are great. I loved all of it!

eh, not bat at all. just tough to understand at first and tough to beat if you don't pay close attention to it. it's also got a bug where sometimes i can be stuck after losing donsol i think its called and it freezes on the web-browser version specifically. i can even play this on my phone via web browser no problem. good job anyways. might be interesting to see what may come next. 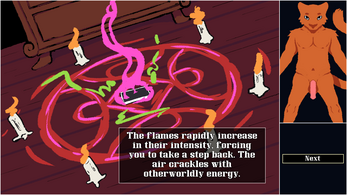 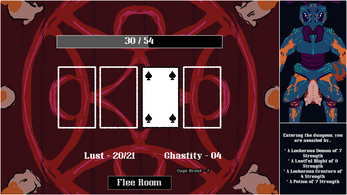 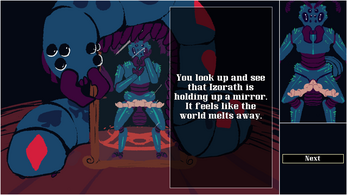